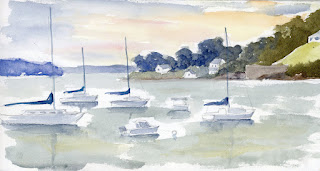 Click here to buy.
Kittery Point Harbor is in a great spot. Its on the southern border of Maine, near the mouth of the Piscatisqua River across from the small island of New Castle, NH. The harbor is located in the curve of the land so all the big ship traffic is way out in the river a distance away.

One afternoon on Chauncey Creek the sun sank behind a haze of clouds making the sky above the trees glow  with a yellow light.

The tide helps break up the ice in Chauncey Creek on Kittery Point. The open water reflection of the pines creates a dynamic contrast to all the winter white.

Chauncey Creek on Kittery Point is a tidal salt water creek.  When I first moved to Maine I lived on the edge of this beautiful creek.

Categories: 6x8, Kittery Point, landscape, late winter, Maine, plein air, Watercolor
A battle of the The French and Indian War was reenacted at Fort McClary on Kittery Point, Maine this past weekend.

When we stopped at the Kittery Point town dock a very strange looking vessel was pulling away from the wharf.  It was a replica of a “Jolly boat”. It had four rowers and a sail!  Its was flying a plain white flag…the flag of the naval ensign of France in 1754.

The fog was rolling in off the open ocean, obscuring the forest behind the fort’s block house. On the water visibility was fine for the invaders.  The boat landed on the shingle beach. Cannons blazed away. The harbor was filled with a volley of “booms”! It was quite exciting.

By the time we arrived at the fort the battle was almost over.  Maybe that was OK as the cannons are really loud !  As we walked down from the fort a very official looking commander was lining up the troops for the audience to inspect.

He was an impressive looking colonial officer with an elegant uniform, a huge sword and polished knee high leather boots…

He invited the ladies in the audience to come in closer to inspect the troops; announcing loudly that some of these fine looking men were single…

These officers and soldiers were wonderful models! When they weren’t in a battle of some sort they were sitting around their encampments, relaxing or preparing meals. They were reenacting what live was like in the 1700’s …life then was very slow.
Colonist. 8×11 watercolor on Rives BFK

Sketching these actors in their period costumes was great! Several of the French sailors had their wives traveling with them. This delightful French colonial woman explained everything she was doing as she set about preparing dinner, a stew cooked in a dutch oven over an open fire.

The sailors had a nice dinning tent with wooden furniture, hand carved wooden dishes, goblets and utensils. Everything they used was a custom made replica from the 1700s.
A new recruit was learning how to present arms. These rifles are working replicas of guns used during the French and Indian War.

I found a wonderful sketching spot with excellent views of the fort and the sailors’ camp.

I did a quick sketch of the block house and put in some color notes.
6×12 watercolor on Rives BFK

The conversation was fascinating.  I learned a lot about colonial life in the 1700’s, the nature of the Seven Years’ War and why these participants love doing these historical reenactments.

Enactors camp out over night in beautiful locations and live like colonists did in the 1700’s, with no electricity, no TV, no internet. Evenings are spent with interesting people, wonderful conversation, great food, and stories of other historic encampments. Slow living! What fun!
6×7 French Sailor. watercolor on Rives BFK

The block house at Ft McClary.
6×12 watercolor on Rives BFK

As we walked to another French and Indian camp on the other side of the fort we passed an old cannon sitting above the harbor on the ramparts.

The French soldiers were cleaning their firearms. Everything must be ready for the next battle. They have to prepare all the gun powder packets by hand.

The view of the harbor was intermittently obscured by fog.

Fort William and Mary in New Castle, New Hampshire sits across the mouth of the Piscataqua River from Fort McClary. These two forts were active in colonial times.

The French sailors gathered for dinner as the tide rolled in and the fog came with it.

Kittery Point harbor as the fog rolls in.
3×7 watercolor on Rives BFK

Categories: Fort McClary, French and Indian War, harbor, historical reenactment, Kittery Point, Maine, plein air, sketchbook, watercolors
A really great thing happens when you are out doors painting…stuff just happens and you roll with it.
Hey, we know the rules of the game: its gets hot, its gets cold, it gets dark, the wind stops blowing, the wind starts blowing, the tide comes in, the tide goes out, it starts snowing, raining, sleeting or…it gets sunny!
A guy comes home from fishing and rows away in your “model dory”, a really big boat docks, blocking the view of your subject…or a guy drives up in a pickup truck, gets out a chain saw and cuts down the tree you are painting!  Really – it happens.
My 5 star event was getting caught in a cattle drive in Targhee Canyon …
This day was peachy…the stars were aligned.
For more adventures see FRESH PAINT FRESH AIR

Categories: ice, Kittery Point, Maine, oil paintings, plein air, sketchbook, snow, video, winter
Winter is coming to an end! I know there are a lot of folks out there that are happy about this. As the snow drifts melt I have more space to park my car but it also is rapidly changing the landscape.

At the Rachel Carson Cutts Island trail head on Kittery Point there is more pavement showing along the road but the woods are still thigh deep in snow.

Chauncey Creek was almost covered in ice a week ago. The creek is tidal so the tides and saltwater move ice out faster than on fresh water lakes and ponds.

I set up my easel with water views to my left, right and straight ahead.

The ice has disappeared from the middle of the creek and is melting along the shore and in coves.  Large cakes of it were scattered around.

I did a number of sketches in ink and pencil to help me decide what I might paint.

There was so much great material to choose from and the tide was rising.

The light was changing.

A thin haze of clouds streaked across the sky.

I decided to paint a cove in the creek with slabs of ice scattered around.

The light started to get bright and hazy with indistinct shadows as I started my block in.

Recently, I’ve been approaching my plein air paintings with a direct method of paint application. I don’t do any underpainting, and I premix my color groups so I can paint faster.

As the sunlight dimmed a thin sheet of ice formed on the surface of the creek.

The sunlight was now gone but I kept to my original idea. I decided to change the foreground on my small panel(10 x12).

I wanted to included more slabs and cakes of ice in the cove and shore area.

This is the view of my easel looking down from the snow drift behind me.

I really picked up speed as the light dimmed and it got colder!

Marcus kindly documented today’s painting trip. He came along on this late winter jaunt to do some sketching.

I’m going for a wrap on this one. I ‘ll put the finishing touches on it in the studio.

Or use it for a larger studio piece!

It was gorgeous today, clear and sunny with temps in the high teens… a perfect day to get out and paint, we were in heaven!

The choice location was along Chauncey Creek on Kittery Point, Maine.  The challenge was to find a place to park and not be in the middle of the road.

I drove half way into the drift and set up comfortably behind my car with my easel tripod on dry pavement and all my gear in the car safe and dry. What could be better?

I proceeded to sketch a variety of views of the creek.

This is the sketch that I choose to guide my painting.

I love painting out of the back of my car.  My gear box is there with everything I need and I have my paints all laid out on glass plates in my traveling palette.

I sketched in my design with thinned burnt sienna.

Todd Bonita, my painting buddy parked just ahead of me to focus on capturing the nuances of an old boat barn in a snow filled meadow. A neighbor stopped by to tell us that Mr. Fisher, the boat builder, had moved on up to Isle au Haut and he had “built more boats in that barn than you have eaten hot meals”.

It only took me a few minutes to notice that I the tide was going out so I started to paint faster, painting my reflections in first as they would be disappearing soon.

Usually its the moving and changing light that keeps a plein air painter on their toes but with salt water views you have to think about tides.

I actually like this challenge and find that it keeps my painting fresh.  No time to noodle to around…

As the sun dropped I saw other subjects I’d like to paint , maybe on the next trip.

I placed a few last color notes on the panel and called it a wrap.  I can tune it up in the studio later.
8×10 oil on panel

I’m really happy with my “studio on wheels”.  After I packed my gear in the back I just drove out of the snow drift and headed over to the town dock to check out the parking situation for painting there tomorrow.
To see more paintings visit ~ PAINT EAT SLEEP