YOU ARE INVITED
To a Plein air demo in the Garden

And if you can’t make it to Ogunquit on Saturday afternoon you can watch it live on Facebook!  Here is the link to watch it.

IN THE NEWS : PLEIN AIR MAGAZINE is publishing a feature article about me and my paintings!
It will be in the print edition and online. I will let you know when it hits the news stands!

NEW ONLINE eCOURSE COMING SOON!
Yes, we are organizing for the pre-launch!

COMING SOON
* Video: How you start a painting determines your success
* Video: How to make solid design decisions

MY NEW PAINTINGS are on display at:
A Picture’s Worth a Thousand Words, Exeter, NH
Shore Road Gallery / Beth Ellis Cove Gallery, Ogunquit, Maine
Kennedy Gallery, Portsmouth, NH
Mast Cove Galleries. Kennebunkport, Maine
Beachmere Inn on the Marginal Way! You are welcome to visit and see them in the bistro. Available for purchase at the Inn. 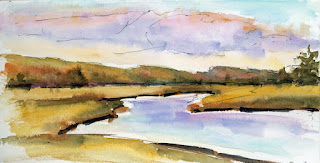 Click here to buy.
The Ogunquit River flows down out of the forest to the marshes behind the barrier dune on the ocean.  It  is part of the vast patchwork of marshes that fill the coast line along the southern coast of Maine. This region of Maine has sandy beaches, marshes and crashing surf.  Farther north at Cape Elizabeth, ME the rocky coast dominates and the peninsula and island region starts. 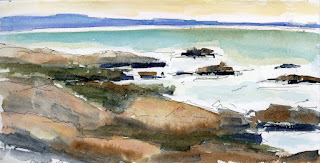 
This lovely spot is in my neighborhood. I live a short drive through the woods to Ogunquit.  When I was 13 did I ever think I would end up living near my favorite beach?  The marginal way is one of the popular walks in southern Maine where you can get right out there on the rocks next to the crashing surf. 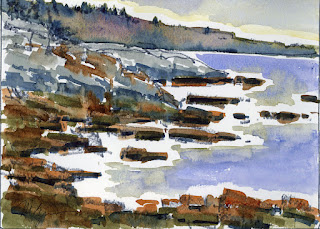 
The Marginal Way links the village of Ogunquit to Perkins Cove with a high path along the edge of the water.  When you stand in Perkins Cove you can look north up the rocky coast to Ogunquit.


The cliff walk along the rocky coast in Ogunquit, Maine is a favorite of thousands of visitors.  One can walk along the cliffs above the crashing surf and view the perfect Maine coastline.

Categories: 6x8, landscape, Maine, Ogunquit, seacoast, seascape, Watercolor
It was a typical spring day on the coast.  A  huge fog bank drifted in over the land then moved out to sea along with the tide.

Perkins Cove in Ogunquit, Maine is shifting gears from its quiet winter season…

…to the popular summer hot spot it has become.

Everywhere, boats were getting ready for the season.

I  was so busy sketching I didn’t notice the name on this sail boat until Marcus pointed it out…”Quick Draw”.

This tiny protected harbor has a fleet of lobstermen who are active all year.

The boats were returning from their morning run.

Traps were piled on the docks. Lobstermen were loading new traps onto their boats.

Freshly loaded and ready to go for tomorrow morning!

Perkins Cove was created by connecting a man-made trench from the Josias River to the sea.

I sat on a bench sketching on Fish Cove, the original harbor the fishermen used.

Fishermen liked Perkins Cove, and so did artists. In the 1890’s Charles Woodbury founded a popular summer art colony in Ogunquit. His great grand children still live near the cove.

Perkins Cove used to be busy with fishermen and artists working and selling their art to summer visitors.  Now the former fish houses are little tourists shops.

This is my watercolor kit for the day. Two small color sets and a tiny water jar. I can carry everything in one hand and my pocket.

There are so many tourists in the summer that artists can only easily paint in the cove off season… the town limits the amount of time you can park here during the summer.

The S.S. Crusher is the town’s ice breaker. What a face! It is used on cold winter mornings to open the harbor so the boats can go out. In winter the cove freezes overnight because there is so much fresh water flowing into it from the river.

The landing above the docks offered a great view of the cove.

Fred, the harbor master, built his own boat last winter.

I quickly sketched a few boats.

The cove has a pedestrian draw bridge. It is the only user operated drawbridge of its type in the US.

The sun came out for a couple of hours drying the watercolors nicely !

Categories: harbor master, Ice breaker, Josias River, lobster boats, lobstermen, Maine, Ogunquit, pedestrian drawbridge, Perkins Cove, plein air, sketching, watercolors
I painted outdoors for 5 years. I did not like painting in a studio once I painted en plein air. I knew I’d have to go back inside one day… so in preparation for that day I built a new studio.

It is painted off white(including the floor) and has banks of 5,000 lumen lights overhead with a mixture of color balanced spot lighting.  These past few weeks I’ve been in the studio painting…I”m painting large paintings from sketches and field studies; both water color and oil .

I have a practice of doing sketches, watercolors and oils on location.
Some are very rough.

I stand in one spot and keep recording what I am seeing.

I turn to my left and sketch and paint that view …

…then turn to my right and do the same…

I will walk around and try to capture enough detail and a feeling of the place for me to be able to remember what was important to me at that time.

I used the watercolor sketches to put together this oil painting. I’m trying for the essence of the place, the soul of the day…its not quite finished.

I do these very quick value/temperature studies to sample colors and see how much chroma the mood will bear.

I’ll do a fast watercolor just to get the feel of the action. These clouds were racing out to sea after a thunder storm cleared out.

A  quick watercolor value study gives me a feel for the simple masses and the shape of things, like wandering with my mind through a place before I decide how I want to depict it. Its very liberating to do this. It helps me to get familiar and comfortable with a place.

On location I do rough sketches first, quick watercolors..then I often will do a series of quick 20 minute oil sketches back to back. Why?  I’ve found that if I paint like this I will often have something good from the lot that I can take home and work with.  I’m a real process painter. I do hundreds of starts, 5×7, 6×8, 8×10’s on location.  So now I’m painting in the studio I have no shortage of reference material for these large paintings I’m working on.
Water colors ~ 6×8’s, 90 lb. sketch paper 6×10, 90 lb. sketch paper  8×12  300 lb. Arches rough
Oils ~ 8×10 linen on panel, canvas on  panel
PAINT EAT SLEEP for more views of paintings.

Marian, Willek and Dennis headed up to Maine to paint for the day with me.  We were hoping for big surf as our subject matter.  This is the view from Israel’s Head looking south on toward Perkins Cove.

No such luck!  It was as calm as a lake.  Such is the life of plein air painters

Marian set up facing north looking toward the rocks with Ogunquit Beach in the background.

Willek & Dennis of course went out farther into the big craggy stuff and set up on the edge.

Willek is down on the rocks on the side of a crevice which in rougher weather would be dicey.

Dennis was on the side of the path tucked into the hill side. A least he could step back and not worry about falling off.

A couple of big guys who were walking by were so impressed with Willek’s start that they wanted his biz card so they could see the painting when he was finished.

Here Marian is working away .  It was calm and peaceful so she even had her umbrella up!

I decided to paint this view of the rocks.

Here is my start. See Marian holding her hat? Well, a big wind came in and blew her umbrella inside out and then it was gusty for the rest of the time. A front was coming in.

This is where I decide to stop on this painting.

I went and found Wilek packing up .

And Dennis cleaning his palette. We then headed off to pick up some lunch and set up in our afternoon location, Perkins Cove.

Categories: artists, Maine, Marginal Way, ocean plein air, Ogunquit, rocks, spring
Willek, Marian and Dennis drove up to Maine to paint surf with me along the Marginal Way in Ogunquit.  Willek is a Renaissance man which I sort of suspected and Marian confirmed.  She’s been painting with him for maybe… 15 years?

When we finished our morning paintings decided to head over to Perkins Cove.  Willek went to his car and fetched this priceless little item that he had made.  He wanted to give to me. Here he is showing me how to use it.

Open it and you are gazing at a palette with a thumb hole.

Behind the palette is a black mirror with value viewer, a miniature copper brush washer, an adjustable  brace to angle the lid/easel to your specifications, a plastic one hand flip bottle to hold your mineral spirits, a big clip to hold your panel on your easel/lid and plastic wrap to put over your wet paint on the palette when you need to move to another location!

Here is this little cigar box pochade in action holding one of my 6×6 square panels.  Do I love this or what? !!!!!!

Of course here is Willek using his cigar box while sitting on the dock and half in a dory in Perkins Cove in the warm afternoon sun. He’s one of a kind ! I love this guy !

Categories: cigar box, Maine, Ogunquit, oils, painting gear
We just had a monster storm in Maine with rain & 90 mph winds here along the coast. We had 7.5 ” rain in the coastal plain over night, inland they got hit with heavy snow. The big wind and the water combination was wild! 150 roads were closed in our county.

Two days after the storm departed it still kept sending bands of snow and rain in off the ocean. I went over to Israel’s Head in Ogunquit to paint the surf. This is the surf at the mouth of Perkins Cove as the tide is going out.

There is usually some wave action on the rocks on the Marginal Way. Today it was quite lively and even a bit too rough for the usual surfers. Nobody was out on their boards. It started to snow heavily so I moved inside the car to do some sketches.

View of surf hitting the point from Perkins Cove. This one is watercolor pencil & watercolor on 90 lb. paper.

The point awash in foam. Never seen so much beautiful white frothy foam – made you want to jump in it. This sketch is ink, water color pencil & watercolors on 125 lb. paper.

A big one hits the ledge and delivers a sloppy foamy crash.

After the foamy crash, now pulling back into the briny deep.

The following day the clouds were beginning to break up so I went to Moody Beach and Wells to see what was happening. The weather was better – no sideways snow so I could set up and get a painting in before dark.

It was low tide and still the surf was crashing.

Here’s a quick wave sketch I did.

As I packed up the sun was peaking through tiny openings in the clouds as more of that big storm headed out to sea. Its really nice living& painting in this land of big sky, big water and big weather!